“And a very great multitude spread their clothes on the road; others cut down branches from the trees and spread them on the road. Then the multitudes who went before and those who followed cried out, saying: “Hosanna to the Son of David! ‘Blessed is He who comes in the name of the Lord!’ Hosanna in the highest!” And when He had come into Jerusalem, all the city was moved, saying, “Who is this?” So the multitudes said, “This is Jesus, the prophet from Nazareth of Galilee.” Matthew 21:8-11

Can you see Him?
He entered the city riding upon a donkey. The people lined the streets, shouting, “Hallelujah,” praising His Name. They hailed Him as King. 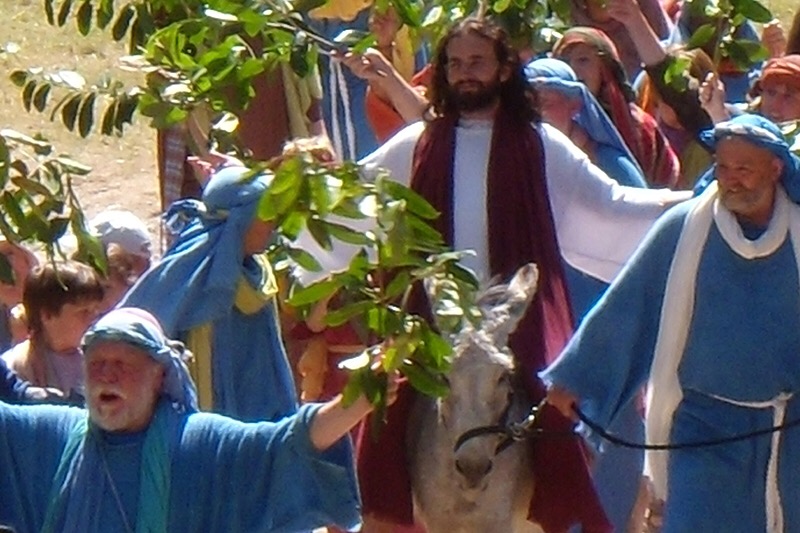 Can you see them?

One week later, they would curse Him and crucify Him. Hate Him for the very thing for which they praised Him just days before: He proclaimed to be King.

How often do we do this same thing?

When things are going good, we praise Him, we worship Him, we proclaim His goodness. We smile. We laugh. We rejoice and tell of His great love to those around us.

Yet, when tragedy strikes, when hard times comes, when things happen that we just can’t understand, we question. We doubt. We grow angry. We even curse Him, at times, believing we should never suffer, because we serve Him.

Can you see yourself?

Fighting, clawing your way through life. Angry and broken over the things that haven’t gone right. Hurt and confused because of the broken dreams and shattered promises of this world. Lost and alone without Him.

Now, can you see Him?

He looks upon you with eyes of love and not anger. He comes to you with His arms open wide. He wants to forgive us, and He longs to redeem us. He died for us while we were yet sinners, and He is faithful to us even when we are so less than faithful! He loves us and desires to be with us, and He patiently awaits our surrender.

This week, as we head toward Easter, let’s stop and really evaluate our responses to Him. Let’s not allow our praises to become curses simply because things don’t turn out as planned.

Bring your brokenness to Him, and let Him heal your hearts. Let Him soothe those fears and doubts. Let Him comfort you and help you. He loves you, and He has good plans for you.

Can we praise Him today?

4 thoughts on “Praises or Curses”

© Mia Grizzle and/or Joey Grizzle, thegrizzlegrist and thegrizzlegristmill [The Grizzle Grist Mill], 2014-2016. Unauthorized use and/or duplication of this material without express and written permission from this blog’s author and/or owner is strictly prohibited. Excerpts and links may be used, provided that full and clear credit is given to Mia Grizzle and/or Joey Grizzle and thegrizzlegrist [The Grizzle Grist Mill] with appropriate and specific direction to the original content.
Author, Educator & Graphic Illustrator
rowen881's amazing blog

welcome to my blog!

Quotes To Bring You Hope
The Christian Tech-Nerd

-Reviews, Advice & News For All Things Tech and Gadget Related-

For the love of Words...

Diary Of The Wests

The West Household Runs Of Love And Laughter

When the Soul Cried Out for Meaning